skip to main | skip to sidebar

The weekend has come and gone and Monday Night is back.
The last week of February.
which has got me wondering about the meaning behind the month.
It so happens it is fascinating lore, brought to us by wikipedia :

February was named after the Latin term februum, which means purification, via the purification ritual Februa held on February 15 in the old Roman calendar. January and February were the last two months to be added to the Roman calendar, since the Romans originally considered winter a monthless period. They were added by Numa Pompilius about 700 BC.

Historical names for February include the Anglo-Saxon terms Solmonath (mud month) and Kale-monath (named for cabbage) as well as Charlemagne's designation Hornung. In Finnish, the month is called helmikuu, meaning "month of the pearl"; when snow melts on tree branches, it forms droplets, and as these freeze again, they are like pearls of ice.

Sounds like purity and pearls are the way to go - which brings me to what I really want to talk about - the Artistic Luxury - Faberge/Tiffany/ Lalique show at the Legion of Honor in San Francisco.

We spent a lovely Saturday afternoon wondering around, enthralled

The workmanship is exquisite and quite wonderful. The color and designs are incredible.

They are miniature works of art and I was in love! My heart was beating so fast - I could have been the Becky Broomwood(?) in Confessions of a Shopaholic. I felt the surge of adrenalin to buy. Too bad none of these Objects of desire are in my budget.

People are crazy for clothes or shoes - but jewels for body and home are my raisin d'etre. 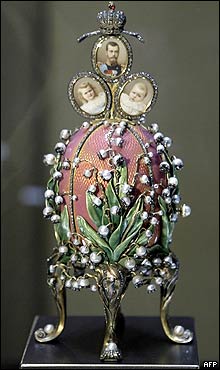 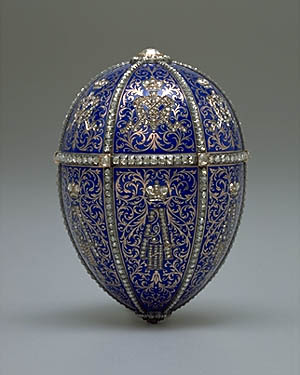 The amazing work of Rene Lalique - is beyond compare - the jewels, the glass the "dog collars"

the enamel work that somehow goes beyond human comprehension 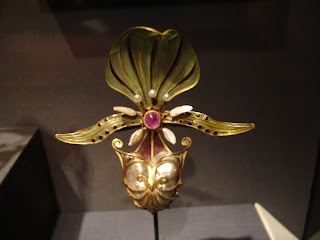 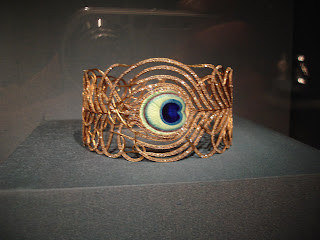 I thought the dog collars really were dog collars - it turns out that it is the literal translation from the french for chokers. And here I was, totally impressed by the stylish dogs of yore.

After absorbing it all, we then enjoyed the view from the grounds,

Did you catch the Oscars ?(dont know why the prizes are always males - do you? )

so for us women lets call it Oscarina's and be done.

You know chokers are best when worn at a young age. I bring that up because I thought the choker that Sophia Loren wore made her look bad - and I hated that. Sophia Loren has always been a dazzling beauty with style, but that choker did choke her. It appears however that dog collars are in again.

I prefer to remember my fair lady in her finery at the ball - that elongated neck with the fabulous pearls -not. I guess that would have been too perfect - its something glittery - glass or rhinestones or perhaps diamonds. 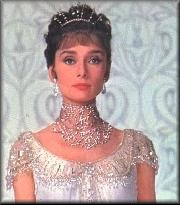 I leave you to dream of pearls to fill a girls heart and diamonds to fill her treasure chest.

How can you turn these ideas into rooms? Translating treasures takes elbow grease, but the rewards are sweet.

Vanity mirror sets or even to frame a large mirror.

How about a curtain of pearls?

Which reminds me when I was a child, I was fascinated by the Pearly King and Queen, and here they are in all their glory : more images to look at and check out the Royal Pearlies history

what a room these outfits would make....

I love to learn about the origins of things. I am envious of the Tiffany show. I am sure it was amazing.

Check out what we do 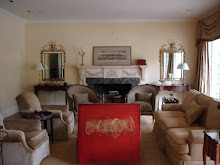 This living room had great proportions but needed help 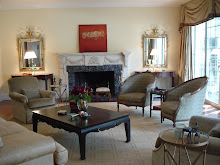 When we were done with the makeover

Promote Your Page Too

Glad you stopped by.
I am Redesigner and Decorator. HGTV style makeovers, although I have to admit, we rarely discover amazing treasures in the attic.

We practice Debt Free Decorating - using what you already own to transform your home! The only cost is our fee.

Chez Delicious is where I post things relating to life and design.
Ideas you can drop in to read, or try at home, or ask design related questions. Visit our website to find out more.

Jen
Santa Clara County, CA, United States
Crazy about Design - Make mine a makeover Reuse, Repurpose Redesign. Live well with what you have. Life is short - Design your surroundings to please. all photo images are mine unless otherwise specified.